You could win two Taylor Swift tickets, courtesy of the Kentucky Humane Society! All you need to do is support the Waggin’ Trail Walk & Festival for the Animals by supporting Team Kobi with 98.9 Radio Now or Team Jay Cruze with 97.5 WAMZ.

Before June 10, you can join one of these teams as a member or donate to their pages to enter to win two Taylor Swift tickets.

Support the Animals – and See Taylor Swift in Concert!

Join Team Jay Cruze or Team Kobi or donate to their pages for a chance to win two tickets to the Taylor Swift concert at Papa John’s Stadium on June 30, courtesy of the Kentucky Humane Society!

All you need to do is make a donation to one of their pages or join either team by June 10, 12018. Your gift will support grateful shelter pets at the Kentucky Humane Society, and you’ll be entered into a drawing for tickets in Section 208. 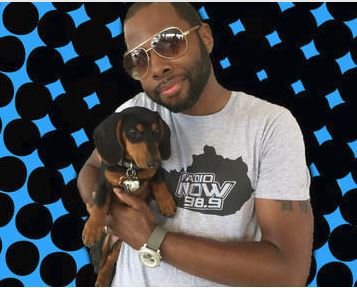 Kobi has been in radio for 16 years and is a self-proclaimed social media junkie. He recently took over the Program Director position at 98.9 – RadioNow and is happy to be back in the Bluegrass state.

Kobi is a newlywed who lives with his wife Courtney and their dog, Kizzy. When he isn’t working he is obsessively watching Sports Center and cheering against Duke.

“I’ve got two rescue dogs at home. Daisy is our little one. A friend of ours got her from the Humane Society in Chattanooga and was going to give her to his girlfriend. Turns out she broke it off with him the day before, so we took her in 7 years ago. She’s our daughter’s pup,” says Jay.

“Babe is our Black Lab and she is MY dawg! I got a call from a friend about 5 years ago saying they found a dog who’s owner died and they didn’t have any immediate family. We took her in and she has been my best friend since day one!”

Jay Cruze is a country music junkie and 20-year radio veteran who started his career at the age of 15 in Boaz, Alabama. Since then, he went on to work in Lexington, Augusta, Chattanooga, Birmingham and now . . . Louisville!

While much of his career has been spent behind the mic, Jay also spent some time in Nashville working for artists like Zac Brown Band, Brantley Gilbert, Montgomery Gentry, Craig Campbell, and Colt Ford.

Jay has 4 children, two dogs, and a wife who is a Master Sargent in the Air Force! On the weekends, his family enjoys spending time outdoors playing sports or exploring Kentuckiana.

On April 15, Jen Foster will be at Headliners Music Hall to perform a benefit concert for the Kentucky Humane Society in memory of friend…