An underweight dog who was found sleeping on trash bags a few miles from Maker’s Mark Distillery was rescued and brought to the Kentucky Humane Society.

On Sunday, January 14, 2017, a St. Louis-area couple was visiting Kentucky’s Bourbon Trail by car. The temperatures were in the teens, and the roads were slick with ice and snow. While the couple navigated the backroads, a stray dog approached the couple’s car.

“We thought he may belong to a family on one of the nearby farms and has just escaped his fence,” said Katharine Kulka, who was driving with her fiancé, B.I. Middleton.

But as they drove, Katharine and B.I. couldn’t stop thinking about the dog and worrying he was lost or alone.

“We decided that if he was still there on our way back, we would stop and check on him.”

After their tour, they drove back along the same lonely stretch of road. They didn’t see the dog.  Just as they’d decided he must have gone home, Katharine pulled over onto a muddy shoulder off the one-lane road, as another car was coming from the other direction.

As the vehicle passed, B.I. noticed a pile of trash. As Katharine got back onto the road to continue the drive, B.I. said, “Wait, I think I saw something move by that pile of trash. What if it’s the dog we saw earlier?”

Katharine turned around, and they went back to the same muddy area. Sure enough, the little brown dog was curled up on an abandoned trash bag, surrounded by strewn refuse. It appeared that the dog was seeking warmth reflected by the black bag from the sun.

“We couldn’t believe we had come so close to not seeing him there! He looked so lonely and cold curled up on the bag of trash,” Katharine said.

When they first pulled in near him, the dog picked his head up and looked at them hopefully. They got out of the car and slowly approached him, unsure if he would let them come close.

“As soon as we reached out our hands for him to sniff, he got up off his trash bag bed and approached us. Despite looking timid, as soon as we petted his head, his tail started to wag! He was super sweet, and wanted to cuddle right on our laps. He was just very cold and weak,” remembered Katharine.

They found that he had no collar and was very skinny. They assumed he had been lost, so they put a towel down on the back seat of their car and lifted him in.

“He was very lethargic the first 20 minutes or so, but as he started to warm up, the heat seemed to invigorate him,” said Katharine. “He sat up, looking out the windows and let B.I. pet him while I drove.”

B.I. looked up local animal shelters on his phone, trying to find out what was open late afternoon the Sunday before the Martin Luther King Jr. holiday. B.I. found that the Kentucky Humane Society was open.

“We were so happy KHS was still open and had a spot available for this sweet dog. We were in Louisville from out of town, and our hotel didn’t allow dogs,” said Katharine.

As the couple filled out paperwork, the KHS admissions clerk asked them if they had a name for the dog.

“We had already named him Whiskey since the bourbon trail brought us together!” said Katharine.

The KHS staff gave him a physical exam. Whiskey’s medium-length fur helped hide the fact that he was very underweight.

“We could feel every rib, and his hip bones protruded,” said KHS veterinarian Emily Bewley, DVM. “He had been without access to regular food for a while.”

Dr. Bewley prescribed a diet of puppy food three times a day. Puppy food is high in nutrients and calories and is often used to feed underweight dogs.

With plenty of food and a warm bed at the shelter, Whiskey perked up. He revealed himself to be a happy, wiggly dog, estimated to be one year of age. Whiskey loved getting attention, and he particularly loved getting treats. The KHS staff noticed Whiskey enjoys trying to get into trash bins – perhaps because that is the only food he had.

Whiskey has now found a loving home, where he will never be left out in the cold or go hungry again. 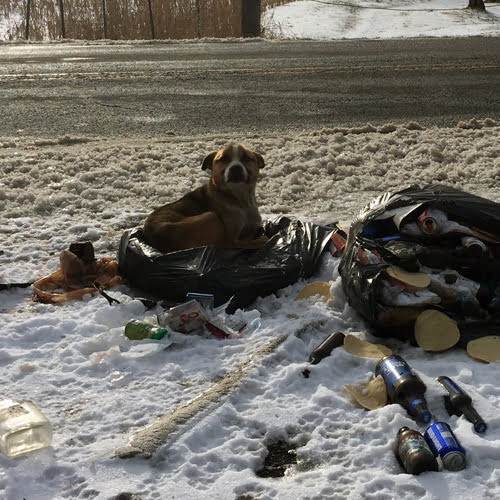 Whiskey was found on a lonely stretch of road sleeping on trash bags. 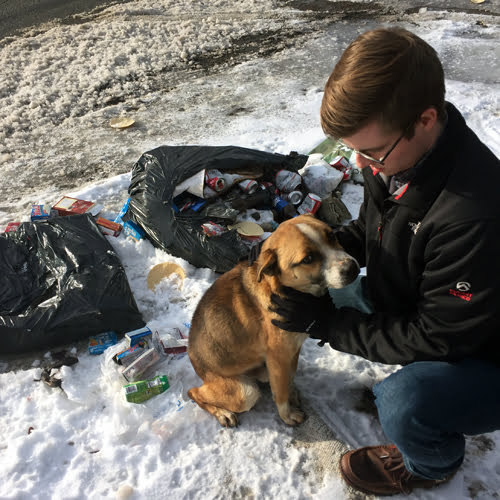 Whiskey was found by B.I. and his fiancee, Katharine, on Jan 14 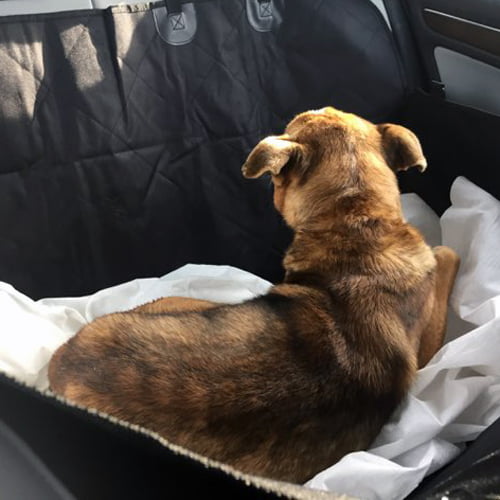 Whiskey’s ribs could be seen through fur. This is Whiskey on the ride to Louisville.

Large Dogs Prove That Big Is Beautiful Are you looking to adopt a canine buddy? Don’t overlook all the wonderful large dogs at the Kentucky…