At KHS, a picture isn’t just worth a thousand words—it can mean a new home for a pet. A beautiful photo of a cat or dog that captures his or her unique personality helps our pets find homes faster. 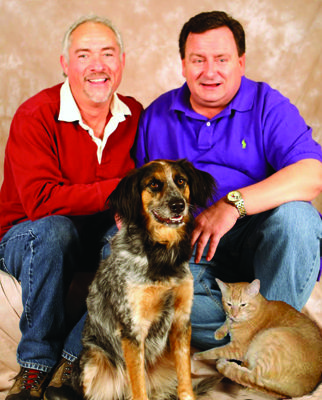 Two of our earliest and most faithful volunteer photographers were Bobby Baumgardner and Jeffrey Vaughn, who began taking photos of our pets in 2006. The couple made it their mission to take beautiful portraits of relaxed, happy cats and dogs at KHS adoption sites. And when KHS launched our current Pet Photography Program in 2010, Bobby and Jeffrey were two of the first people in line to assist. The goal of this program is to provide quality photos to as many pets in KHS’s care as possible with the use of backdrops, props and a full team of volunteers.

One day in December 2010, PR Manager Erin Clephas received a shocking phone call. Jeffrey Vaughn had suddenly passed away. This was something no one had expected to hear. Immediately the staff at KHS thought of Bobby, and many visited with him during Jeffrey’s visitation. Bobby was sad but strong.

To everyone’s surprise, just three short weeks later, Bobby showed up to volunteer. Bobby told Erin that it’s what Jeffrey would have wanted and that continuing to take photos of animals in need was Bobby’s way of honoring Jeffrey’s memory.

Some of Jeffrey’s last words to Bobby were “Be kind to the animals.” Jeffrey lived this sentiment in life, and he continues to live this through his legacy. Jeffrey had chosen to include KHS in his will. Thanks to his incredible generosity, dogs and cats far into the future will continue to feel Jeffrey’s love and compassion. 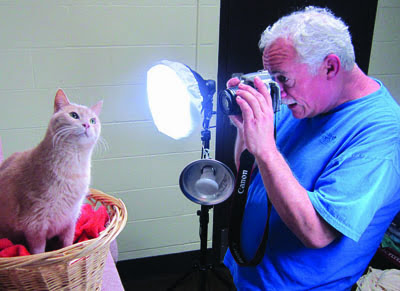 Because of their great contributions, the KHS photography studio is now the “Vaughn-Baumgardner Pet Photography Studio.” The KHS staff is thrilled to honor them in this way because, whether they know it or not, both men are priceless both to the KHS staff and to the thousands of animals they have helped find their loving, forever homes.

Crate Training An Ounce of Prevention Downloadable PDF Crate training is a great way to keep your dog, and your home, safe when you cannot…