Miracle cat survives being thrown from a car 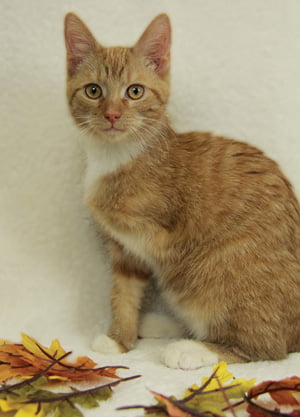 “I couldn’t believe what I was seeing,” says Larry Butler, a local truck driver and business owner. “I was driving on 265 in southern Indiana, and someone rolled down a car window. They had this little kitten dangling from their hand.”

The sedan was going 65 miles an hour. In horror, Larry watched helplessly as the cruel hand-tossed out the kitten. The orange ball of fluff hit a guardrail hard and then dropped lifelessly to the pavement.

Larry pulled his truck to the side of the road as quickly as he could. Each second felt like an eternity. Finally, his rig stopped, and he jumped out of the driver’s seat. He ran as fast as he could back to where he saw the kitten’s land.
He was shocked by what he saw: the small kitten had a gaping wound where his left leg had been. The guardrail had sliced the kitten’s leg off on impact. His little face was bloody from road rash. The kitten reached out his remaining paw plaintively to the man, as if asking for help, and let out a cry of pain.

Instinctively, Larry scooped the kitten up in his arms to soothe him. He looked for the kitten’s leg: perhaps a veterinarian could reattach it, he thought. But he couldn’t find it.

What to do next? Larry drove to an emergency veterinary hospital. He rushed the kitten in. The veterinarian examined the kitten and advised Larry to have him euthanized.

But Larry knew the kitten was a fighter, and he couldn’t give up on him. He drove to the local municipal shelter, Louisville Metro Animal Services. Kristin Seaman, the animal care manager with the Kentucky Humane Society, happened to be there and witnessed the interaction. Each week KHS staff visit the city’s public shelter to transfer in animals to KHS’ adoption program. The two agencies are ASPCA Community Partners and work together to save lives.
Kristin remembers meeting the kitten in the lobby.

“His gums were extremely pale, and he was very lethargic. It was clear he was going into shock, and he needed emergency care if he had any chance at survival,” she said.

Kristin asked Larry if he would allow KHS to try to save him. Larry quickly agreed, and the kitten—now named Trucker in honor of the man who rescued him—was rushed to Metropolitan Animal Hospital. The next day, the hospital called KHS. Trucker had stabilized much more quickly than anyone expected. Larry was right: this kitten was a fighter.
Trucker was brought to the KHS Main Campus, and Dr. Shawn Williams amputated the remainder of Trucker’s damaged leg. After surgery, Trucker woke up and immediately started purring. He reached out his remaining front paw to the staff and “kneaded” them. He ate hungrily—always a good sign.

But Trucker remained lying on his side. He could not stand up or walk, and he did not seem to have control of his bowels. The veterinary team worried that Trucker may be paralyzed.

Trucker was brought to Lyndon Animal Clinic for diagnostics, including x-rays. Dr. Kurt Oliver broke the news to the KHS staff: Trucker had a fractured pelvis. Thankfully, his spine was not broken, but it was unclear if he would have permanent nerve damage, or if he would ever regain control of his bowels.

Trucker remained at Lyndon Animal Clinic, which is located adjacent to KHS’ East Campus. Dr. Oliver and his caring staff monitored him closely and gave him medications. Every day, KHS staff visited the kitten.

Cheryl Parker, a professional massage therapist, met Trucker when she took one of her cats to Lyndon Animal Clinic for a vaccination.

“Dr. Oliver said, ‘Come with me,’ and he introduced me to Trucker. I fell in love with the little guy instantly and asked if I could give him therapeutic massages to help him heal. I saw Trucker every single day. The whole time he was there, I gave him massages at least once a day,” says Cheryl.

Slowly, Trucker began to improve. He loved playing with his purple mouse, and he greeted each visitor with a happy meow. After a few days at the clinic, Trucker began to stand on his own. He would take one or two tentative steps, and then collapse from exhaustion. Then he began to use the litter box. The staff at KHS and Lyndon Animal Clinic were overjoyed! Thankfully, he did not appear to have permanent nerve damage.

Finally, Dr. Oliver said Trucker was ready for a foster home. Nancy Jo Trafton volunteered for the job. Nancy Jo, who works for The Courier-Journal in Louisville, is one of KHS’ most experienced medical foster caregivers and a KHS board member. Her father was a veterinarian, and she grew up taking care of sick and injured animals.

The first day Nancy Jo took Trucker home, he tentatively peeked his head out of the pet carrier’s open door. After a few minutes, he took one hop, then another, into the room. After spending more than a month in veterinary clinics or at the shelter, being in a home was a whole new experience for the kitten.

Keeping Trucker calm and limiting his playtime so he could heal was difficult, says Nancy Jo.

“Trucker is a confident, funny little guy. He so wanted to play with the other cats and explore the house, but I had to make sure he didn’t hurt himself,” she says. “He would get very frustrated and would grumble loudly at me when it was time for him to rest.”

Slowly Trucker began to gain back the stamina and coordination he had lost, and after a few weeks in Nancy Jo’s home, he began using his back legs independently instead of hopping. Under Dr. Oliver’s supervision, Nancy Jo weaned Trucker off the last of his medications. After a final check up at the shelter, Trucker was finally ready for his forever home.
Cheryl, the massage therapist, had kept in touch with Trucker while he was in Nancy Jo’s home. She and her husband, John Sikorsky, stopped by for weekly visits, and delighted in the progress he made. It was clear Trucker loved them, and they loved him. The couple adopted Trucker, and now the resilient kitten lives with Cheryl and John’s three other orange cats—Libby, Greta and Jin Jin. He spends his days chasing after his “sisters” and taking quick breaks to be picked up and loved on by Cheryl and John.

If Trucker remembers that awful day in July when he was thrown from a speeding car, he certainly doesn’t show it. As Larry knew, Trucker is a fighter. The resilient, confident kitten keeps trucking along, eager for the next adventure.

We Still Need Your Help

Trucker is just one of many pets who needed our help. Without your generous support, we would not be able to continue our lifesaving mission, and pets like Trucker would suffer because of it. Every year, costs for food and housing of the animals go up. Every year, costs of veterinary supplies and services rise. Unfortunately, so do the number of pets who need our help. We need your support now more than ever. Last year, your tax-deductible donations helped us save over 6,000 animals. This year, we’d like to save even more. Will you help?

Please donate to the Kentucky Humane Society. You can use the enclosed envelope or make a donation online at kyhumane.org/donate. To talk to someone about making a gift, call Frank at (502) 515-3143.

Crate Training An Ounce of Prevention Downloadable PDF Crate training is a great way to keep your dog, and your home, safe when you cannot…